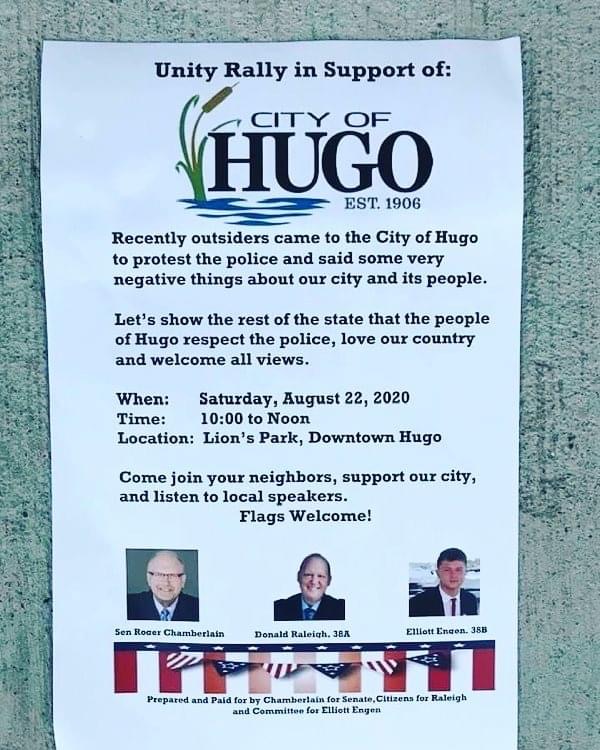 Tomorrow 8-22 at 10am there will be a unity rally in Hugo, MN. The rally is in response to DFL’s Minnesota House Candidate John Thompson’s comments during last weeks protest at Bob Krolls house.

However, this rally almost didn’t happen as the original organizers/speakers backed out at the first signs of trouble from possible bad actors. Below you can see the original flyer and the last minute announcements of the Republican state Senator and then two Minnesota house candidates:

The Reverend Timothy Christopher from Shepherds Works Charity in North Minneapolis will give the introduction to the speaker, and the opening prayer. This will be followed by many speakers who have stepped up to the plate.

Including people like The Minnesota State Senate Candidate for district 67 Alexander Deputie. Which is the same area that DFL candidate John Thompson is from. Groups like Magasota have also stepped up to help keep the event going and will be speaking. Many other great groups and people will be there speaking as well.

Most importantly is the “rocks and cows” of Minnesota are stepping up! Many have showed there support and plan to attend the event. We the people are not going to be scared into silence.

Together we can show the establishment Republicans what it’s like to have a back bone. This rally will be a success without them. Maybe next time they won’t be so quick to run.