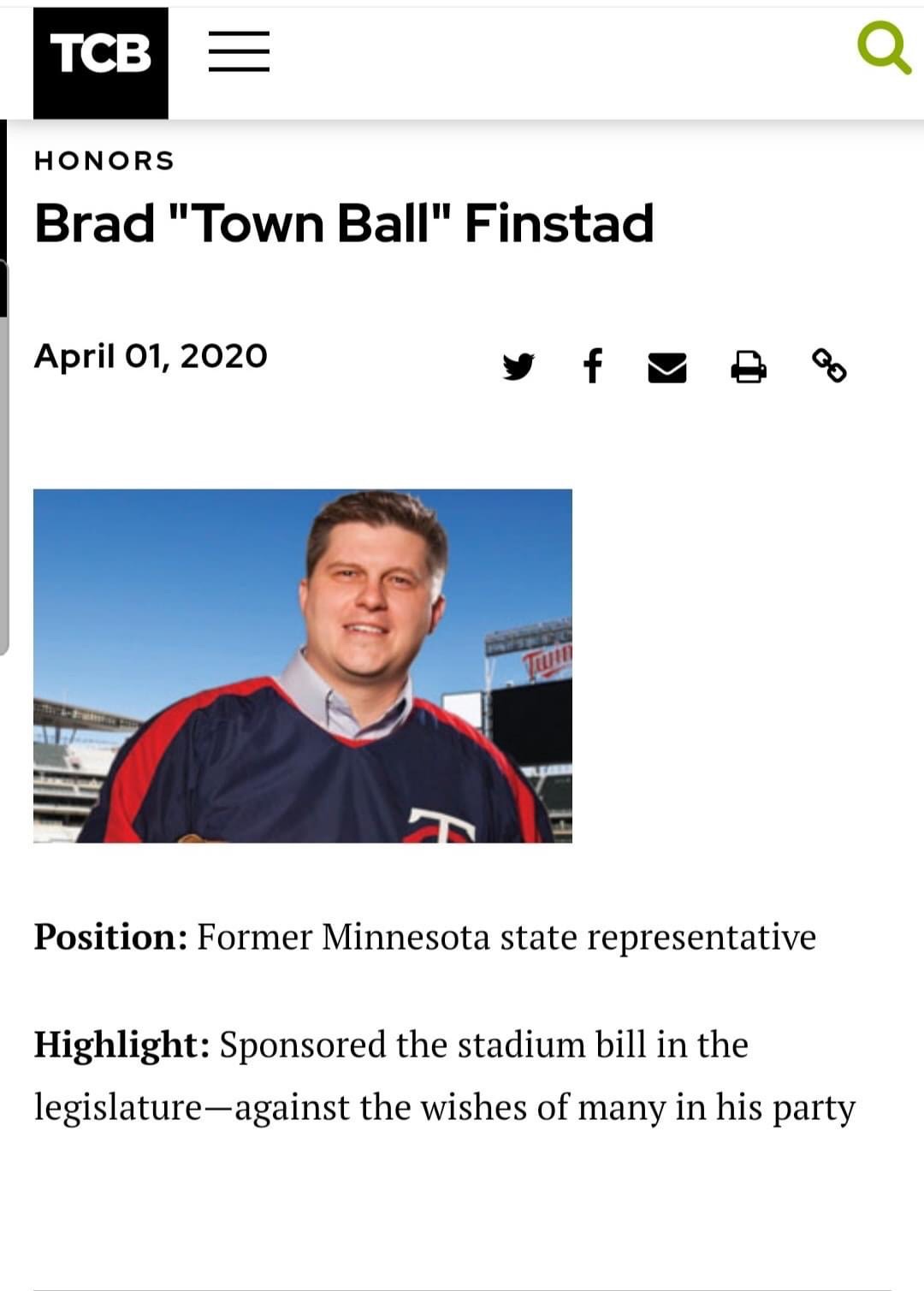 Regionally known and accomplished baseball player from New Ulm, Brad became a Republican State Rep in his 20’s. Brad’s claim to fame as State Rep was helping state and Hennepin County tax payers buy the Pohlad family (richest family in Minnesota) a $550mil baseball stadium. He authored and shepherded the Target Field bill, most Republicans then did not favor, into passing.

After only a handful of terms as a State Rep Brad quit that 40k/yr job and moved on to a career managing a series of rural and agricultural associations that lobby state and federal government for attention and money. He is well liked and widely known in govt due to these lobbying associations. He has been mentioned in the past as a possible candidate for higher office due to his visible profile in the professional politician community.

WHAT HAS HE DONE RECENTLY?

Brad did such a good job lobbying govt for the rural and ag associations that when Trump got elected he was appointed to be the man at the USDA Rural Development in MN. That job put him on the other side of the table handing out the govt money to those same rural and ag interests he associated with before. When Trump lost he went back to managing another rural interest lobbying association. SO THAT’S NICE.

WHAT IS HIS POLITICAL RECORD FOR THE LAST 10 YRS? SINCE COVID?

Brad works for rural and ag interest groups, and of course socially most of the members are conservative at home, but the corporate lobbying function of the associations means you stay quiet and play nice with everybody in both parties because you want their govt help or money.

Essentially Brad has NO political track record since over a decade ago when he got taxpayers to build the Pohlads a baseball stadium. Brad didn’t even make a public statement in favor of his President’s (Trump’s) China trade and tariff policy when the neocons and Democrats were trying to turn farmers against Trump and surrender to China.

Google – “Brad Finstad” and Covid, or Mandates, or Taxes, or China, or Masks, or Trump and you get a big fat zero outside vanilla quotes while speaking as one of the association managers or govt agent. Nothing. He hasn’t made a political declaration in favor of conservative anything in at least 10 years that we can find……until he declared for office.

We can’t even find an editorial against the Biden/Klobuchar tax plan in “Build Back Better” that taxes all family farms upon the death of the operator(dad). Found one from Collin Peterson, Jeremy Munson, Jim Hagedorn, and others. No Brad.

“Nice” family man. Very good manager. Republican. Says he’s conservative, but after 2 years of Chi-bug dictatorship and 1 yr of insane Biden we are well past 10 yrs of silence and “trust me” being good enough. Brad missed his window. He should have run against Tim Walz for CD1 when just saying you were conservative and having the most contacts in the district would be good enough for Rocks & Cows just to get rid of Flannelmouth. We want more. We deserve more.

NEW PLAYER, NOTHING CHANGES FOR US
Somebody that mirrors the daily fight US Rep. Jim Hagedorn gave us on every issue has already declared. JEREMY MUNSON has stood with the protestors, spoke at the rallies, carried the fight on the House floor, sued to stop the 2 yr dictatorship, fought for independent farmers and producers, and was front and center at the Trump Inauguration in DC. We don’t need to take his word for anything, he’s done it. WE STAND BY JEREMY MUNSON as the best choice to honor Jim and represent us as the Congressperson for CD1 in Southern Minnesota.